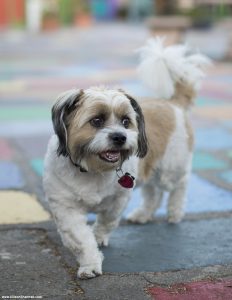 Spreckles may have been my best dog. (Don’t tell Macaroon or Mallomar.) He was fiercely independent, intelligent, uniquely verbal, (I swear I thought he would grumble a human sentence one day,) he never begged for food, he was obedient, never needy or panicked when I left the home, had a sweet disposition, he liked to cuddle but not in a clingy way and he only barked when there were intruders. (The mailman counts as a daily intruder.) And man was he so cute with that funny, soulful face, white stripe on his butt and that bouncy white tail that he strutted on his 3 times daily walks. People often asked; “What kind of dog is he?” It was always a guess that he was a Lhasa Apso mix. But my answer usually was; “He is a shelter dog. The best kind.”

He was not without his quirks of course. But nothing that should have resulted in him being thrown in a county shelter by his previous owners. It amazed me that such a great dog could end up in a shelter. He just needed someone to take a chance on him. And I am so grateful he came into my life. He was a great dog. Like ALL animals at the shelter.

Spreckles, formerly called “Junior” had some previous owners who just did not figure out that the food they were feeding him was causing him extreme allergic and physical reactions. So bad that he was inflamed from the inside-out and had a butt so raw and irritated like a baboon. He was so bothered by his painful condition that when children wanted to touch him, he reacted apparently by snipping back. The consequence for that bad owner’s behavior for not understanding his situation was to dump him at the Clark County, Nevada Shelter where he was labeled a “biter.” His was facing a death sentence after his time ran out in ten months with no adoption. Luckily, the Nevada SPCA knew he could be rescued if he just went to a home where he wasn’t fed crap.

And just like all things in Vegas, we all got lucky when I just happened to walk into the Nevada SPCA that December day. Because there were only five-star meals and no kids at this home to pull his fluffy tail. His condition changed practically overnight on a diet of salmon kibble and the peace of sitting under a lemon tree in paradise. And he actually loved playing with children once he wasn’t inflamed any longer. Go figure.

I thought that in keeping with my “sweet dog theme” of first dog Macaroon, he deserved a new regal sugary name that would also reflect his new environment. Spreckles is a spinoff of the “Spreckels,” Family; the sugar beet empire starting in the late 1800’s, which helped build mostly southern California and were contributors and owners to many of historic architectural treasures like the Hotel Del California. It seemed fitting that Spreckles would now have his fortune turned around in a sweet way too.

Spreckles came into a home with an already spoiled first-dog Macaroon. He tolerated his rank and loved Macaroon up until his passing in 2018. But I secretly think Spreckles relished his quiet 2 ½ years solo with me until I thought he might benefit from a younger buddy to keep him spunky. We adopted Mallomar from the Riverside County Shelter in September 2020 at the height of the pandemic. Now Spreckles was now subject to random wrestling sessions and lots of puppy playtime. He now tolerated this wild behavior like a champ.

Especially since Spreckles was the equivalent of a soulful Dalai Lama, (some Tibetan Buddhists monks believed that the souls of the deceased Dalai Lamas were temporarily reincarnated in Lhasa Apso dogs.) He preferred quiet corners and dark places in the house. And he was happiest being Zen buddha on the back patio chair most of the day by the pond, watching the birds and sitting in the sun under the lemon tree. In recent months, he moved from the chair to a bed on the ground because he couldn’t jump up.

But he never refused our 3x a day walk to spread his peace and love, (and get cookies from his favorite friends at Gingerly Wax around the corner from us.) And he was our neighbor ambassador who helped us get to know everyone in the hood. (Mostly their dogs.)

He loved to play with his favorite stuffed “babies” as we called them. In his unique fashion, he would just pile them up in the backyard like prized possessions. He would grab them and run them outside in the yard with excitement just when we were about to go for a walk. I always thought this was his way of saying; “I am so excited to go for a walk, I realize it’s Spreckles’ time, can you also play with me and my babies too. Please, please??!” He was a funny, wise guy.

And he was obsessed with the drain water that suddenly came out in spurts during rainstorms; scratching to find the source. It was the funniest thing to watch. It was like he was trying to solve the mystery of “Where is this rain water coming from?! And will it ever arrive again?” I think that was his Dalai Lama coming out to warn about the drought and climate change. Or he was just the goofy dog that he was. Either way, it was hysterical.

He did love car adventures as any proper dog would, to break up his daily routine of wanting to kill Rafael the mailman. (Lhasa Apsos are translated in Tibet as “the Bark Lion dog” and they guarded Tibetan dwellings from the inside by barking. So, nature kicked in daily upon Rafael’s arrival.)

He traveled as far as Colorado, all over Arizona, Nevada and California. He was the star attraction in his namesake town of Spreckels, CA in 2019. (If only in my mind.) And eagerly wanted to hop in the car for our last road trip just days before we sadly had to say goodbye to him.

His decline was swift as his vets predicted. He had a swat team of medical help in two states who communicated his care with each other and always got him in for a visit despite omicron covid staff shortages during a horrible time. We are thankful to them and there were never enough wine bottles and lemons from my backyard that could repay them for all the last minute visits and special care at Bay Park VCA, Sahara Pines Animal Hospital, and the Animal Healing Center.

It was a routine teeth cleaning which picked up on something being off with his liver in October and November 2021. Our diligent vet Dr. Ulitchny in Las Vegas warned us it could be a liver infection or worse; cancer. It was the latter. A form of dog lymphoma that moved swiftly and it seemed that his body practically broke down almost overnight. It was hard to believe since he was in normal spirits practically up until the end. I think Mallomar sensed he was not well. He would snuggle on the bed with him in his last weeks and Spreckles didn’t seem to mind. Dogs are strong and intuitive like that for us.

Spreckles wanted to go in peace like the Dalai Lama that he was. One day he just didn’t want to eat or walk anymore and we knew it was time. We said goodbye to him on a beautiful sunny January day under the lemon tree with all his favorite stuffed “babies” surrounding him. Mallomar and I gave him lots of hugs and kisses goodbye for hours and I told him what a great dog he was. I am sure he is reincarnated in the Dalai Lama now.

We know he was loved and touched by many friends, family, neighbors, caregivers, my colleagues and even strangers. We hope his story is an inspiration to only consider adoption since breeding pets just contributes to more animal abuse, poor breeding conditions for money and more pets ultimately in the shelter which might be euthanized before their time runs out like Spreckles’ almost did 9 years ago. If so inspired, donate your time, money or adopt from a shelter in Spreckles’ name, or to any of your favorite local shelters like the Nevada SPCA.

I can't recommend them enough. I had to say goodbye to my 21 year old cat companion. I read the reviews here on Yelp and chose Paws Into Grace and they made an unbearable situation not worse - from the people on the phone to the amazing doctor who... read more

My absolute love Dante had heart failure three months ago. After having him on many medications to help him, his enthusiasm and appetite declined last couple of days. He was in pain and we decided to help him go to heaven rather than torturing him... read more

I wanted to thank you for sending Dr. Brown to euthanize our beloved Myleigh on March 4, 2021. She was compassionate and accommodating, she explained every step of the procedure, and gave us some alone time with Myleigh after she sedated her, but... read more

I can't recommend them enough. I had to say goodbye to my 21 year old cat companion. I read the reviews here on Yelp and chose Paws Into Grace and they made an unbearable situation not worse - from the people on the phone to the amazing doctor who came out to the house. She was so understanding and supportive. They were all so helpful, understanding and nice. My girl got to stay at home and say goodbye in the backyard (a hummingbird flew over and it seemed like a good sign too). So glad I didn't have to take her to a cold vet office.

My absolute love Dante had heart failure three months ago. After having him on many medications to help him, his enthusiasm and appetite declined last couple of days. He was in pain and we decided to help him go to heaven rather than torturing him with more medications which would make him even more miserable. I called and spoke to a very kind lady who was patient as I cried through making an appointment. We made an appointment for 1:30pm. Dr. Toni arrived. She was very kind, explained everything to us and gave us the time to be with our boy after the first shot. He wasn't relaxing enough so she gave him a second shot. We stayed with him throughout the entire process and I carried him to her car in the end. It was a very difficult decision but knowing that our boy is not in pain, gives us some peace. We are thankful to Dr. Toni for her kindness and compassion. They will arrange the cremation for us. Since we are in a pandemic, we had our masks on and said goodbye to our boy in our garden.

I wanted to thank you for sending Dr. Brown to euthanize our beloved Myleigh on March 4, 2021. She was compassionate and accommodating, she explained every step of the procedure, and gave us some alone time with Myleigh after she sedated her, but before she attached the IV. We were relieved that we made the decision to let her go to doggy heaven at home. It was a tranquil and serene passing for her, and it very much aids us in the grieving and healing process knowing that she passed away so peacefully. Based on the grace and compassion Dr. Brown demonstrated on one of the most awful days of our lives we would not hesitate to recommend Paws Into Grace for others facing this very painful time.
Accessibility by WAH
San Diego Orange County Cremation Office